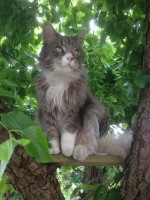 I got in touch with Anita to groom my Maine Coon cat, Dexter. Despite owning an array of grooming items, and my best efforts, it was extremely difficult to groom him because he hated it so much. The situation escalated to the point that Dexter became extremely matted and was obviously in discomfort. Anita agreed to come to our house and assess Dexter because he does not like travelling and is very nervous around strangers. I also didn’t want to put him through the trauma of being sedated at the vets. When she arrived, Anita put on calming music (which calmed me more than Dexter I think). Then she just spent time in the room with me chatting so that Dexter could get used to her presence. Then she started to interact with him using cat toys. She then asked me to hold Dexter and talk to him and she started to shave the matts out, giving him regular breaks and regular treats intermittently to make it a positive experience. Anita took her time and the session was very much geared to Dexter’s needs and keeping him as stress free as possible. The final bit was shaving around his bum and combing through his tail, by which time Dexter had clearly had enough so the session ended. Anita went through all my grooming equipment and out of all of them she said only one item was really useful, a wide toothed comb, which also happened to be the cheapest item I had bought. She also showed me how to comb him properly. Anita definitely has a way with cats and I referred to her as the UK version of Jackson Galaxy! I was impressed because Anita makes her money from grooming, yet she left me with skills and tools so that I may never need her services again, although I would have no hesitation in using her services in the future. Dexter is much happier and more relaxed and even allows us to stroke him and comb him (in short bursts). I cannot recommend her enough.

Dexter’s grooming was treated like a behaviour case as that was exactly what it was. Dexter was extremely fearful of being groomed. Firmness doesn’t come into it. Dexter had to be treated with patience and kindness and ways found to work with him to achieve the same result. The bigger picture has to be considered when grooming cats that do not like to be handled or groomed.

Should you own a cat that has issues with grooming then you need to hire a groomer who also works closely with your cat’s behaviour. Anita Kelsey has a unique way of working and can make a real difference with cats that have an aversion to grooming. If you wish to know more about this type of grooming session then please contact Anita is info@catnips.co.uk. Please try to give as much detail as possible along with a photo of your cat.

Behaviour grooming consultations can be anywhere in the UK although travel costs will apply.