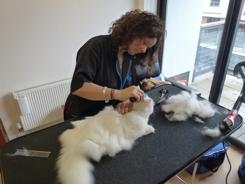 Anita Kelsey is a Persian cat groomer and an expert in her field. Working closely with vets and by word of mouth from regular clients Anita is booked out weeks in advance. Based in Notting Hill, West London, the Persian cat groomer service is offered all over London. From West to South London, North to East london, you will not find a more professional and caring Persian cat groomer.

To enquire about a London Persian cat groomer please email info@catnips.co.uk. Please state your post code, coat condition, age of cat, and personality of your cat during grooming. A photo is always required.

Thank you to http://cattime.com/cat-breeds/persian-cats for the above information