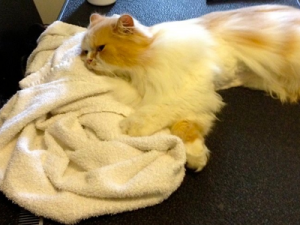 ‘I contacted Anita from Catnips as my Persian cross, Herbie had got quite matted over a few weeks: he is not an easy cat to groom and we could only
manage brushing him for about 3-5 minutes before he would hiss and bite – not hard and he never drew blood – he is a very friendly cat, he just did
not like to be brushed! I did not want to take him to the vets as they would put him under anaesthetic in order to clip him. So I searched on the
internet and found Catnips.

I chose Anita because she not only is a cat groomer specialising in fluffy
cats, but she is a cat behaviourist as well! When Anita came over, she was very professional and friendly. I was worried that no one would be
able to groom Herbie, because of his past behaviour, but I needn’t have worried. Anita was brilliant with him, despite all the yowls and hisses as
he was clipped and groomed. After 2 and a half hours, we had a very smooth and sleepy young cat, he even took a little kip on the grooming table!

Anita left us with lots of advice about setting in place a grooming program and what combs to buy. I will definitely be recommending Catnips
to every long haired cat owner I know and I look forward to grooming

Herbie now as I know his hisses are just a lot of hot air over nothing!