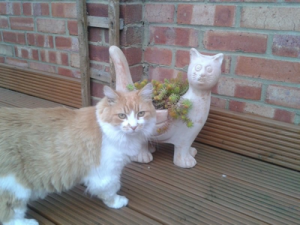 Victoria Weathersby – Enfield
Let me intoduce you to Gali.

She is nearly 10 years old and a scaredy cat! (although a total sweetheart with me) I adopted her and her brother Leon in 2011. She is a domestic long hair and feel that grooming has not been part of her life. To the effect that after a year of trying to groom her with various advice from internet blogs and cat people to remove matts, I had to resort to taking her to the vets to be sedated resulting in a lion cut. Her brother was also treated,but only having his back legs shaved. What followed next was a combination of guilt and tears having to watch them recover from the sedation, I swore never to go down that avenue again.

Having said all this Gali enjoys the garden and rolls around to her hearts content,still refuses to groom herself regularly or to be groomed by me.Leon now grooms himself and lets me gently help with any knots that occur (but still under his terms!)

I was becoming so stressed I didn’t know where else to turn until I found Anita! What a godsend! I feel that I am not alone now. She was there for us. I cannot say Gali enjoyed the experience and I must say I think I was worse! But felt Anita had prepared me well for what was to come. All that followed was kindness and a professional manner until the work was completed. This entailed clipping of claws, shaving (more to this than you can imagine!), dry bath, combing out knots and wiping out ears! Let alone all the clearing up of mountains of cat hair that now Gali was free from!

How is Gali now? Well…totally happy! She follows me around, still enjoys her garden digging and rolling around.This morning with a few treats I was able to comb her (just for a short while). We can only move forwards in small steps now, and I feel without Anita this would not have been possible.

Having said all this I STILL NEED ANITA