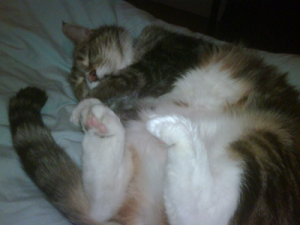 I was really impressed with Anita. I booked her for her mobile grooming services to deal with difficult fur matting affecting my eldest cat. Nicky was adopted from the RSPCA about 20 years ago and was already 3-4 years of age when we got her; so apart from being elderly, she has always been a nervous and shy cat. It has taken this long to build her trust generally and although better with strangers today than she was, she remains really nervous around them.

Nicky’s age means that she hasn’t been able to groom for a while due to arthritis. When we took her to the vet, the vet said he would need to put her under to shave the matts. This would also involve an overnight stay at the vet’s surgery, even though it is only down the road. We had tried our best to groom her, but certain parts (like her belly) she would not let us get near. It was a horrible feeling of guilt because there was nothing we could do about the matts. We could tell they were hurting her and that she needed to be shaved, but we could not bear the prospect of the unnecessary anaesthetic. Obviously putting such an old (but generally healthy) cat under anaesthetic is very risky and we were not comfortable with that going ahead. I looked for ways to get the job done without anaesthetic or even a trip to the vet.

I only found two mobile cat grooming services on the internet and did not instinctively like the other as much as I did Catnips. Having found Anita’s website I could tell instantly that she loves cats. The thing that made me notice this is where she says on her cat sitting services that she will always politely decline requests from cat owners asking for her to pop in every couple of days to feed a cat. This is how I knew I could trust her. I was right to: Anita was very professional. She was early, she brought all her equipment and she took the time to groom Nicky in a very gentle and considerate way. I was surprised at how easy it was. Particularly for a cat that had never been handled for so long like that before. There were minimal problems and I am really glad (and relieved) that I found Anita.

I have seen that other cat groomers use muzzles to carry out this job, whereas Anita would only do this as a last resort. Personally I would never allow either of my cats to be muzzled so I am glad Anita has that view of things. I would definitely use her again. The price was also very reasonable for the amount of time she spent here and I am really happy with her work. Basically I’ve nicknamed Anita “The Cat Whisperer” and Nicky and I are better mates after the event! Just goes to show how often vets might recommend unnecessary procedures for problems that could be solved just by spending a bit of time working with the cat…